Compared to tertiary deposits, shark remains are very scarce in this area, especially teeth larger than 1 cm. This means you need a lot of time, patience and luck when you like to obtain a good collection of Maastrichtian shark teeth.

The Upper-Maastrichtian Formation of Maastricht (if fully exposed) consists of 6 chalk members, each one separated from the latter by a horizon. In every horizon vertebrate remains can be found, some are better than others. The presence and/or thickness of those horizons are very different from quarry to quarry. Sometimes gorgeous specimens can be found in situ in the surrounding chalk members itself.

At the base of the Valkenburg Chalk and on top of the Lanaye Chalk (top of the underlying Gulpen Formation), the Lichtenberg Horizon can be observed: a small layer, very much varying in thickness (forming lenses), where shark teeth are locally more abundant (see picture below). This horizon is best exposed in the ENCI quarry near Maastricht (Netherlands).

The Emael Chalk starts with the Romontbos Horizon, again usually a small horizon, but rarely forming lenses with a lot of vertebrate remains. Sometimes the Lava Horizon is also exposed, half way the Emael Chalk member (Marnebel quarry, Eben-Emael). Also this horizon can be locally thicker, yielding nice specimens. The Emael Chalk comes to an end with the Horizon of Laumont.

Other fossils present are Mosasaur remains (teeth and vertebra), sea urchins (huge Hemipneustes...more than 25 species in the Nekum chalk!), different brachiopods and belemnites, the lobster Protocallianassa faujasi (Desmarest, 1822) and many other. 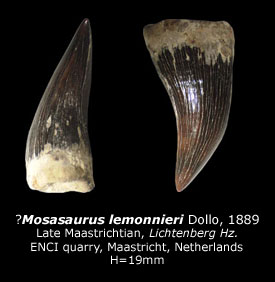